Demanding quali﻿ty in genealogy since 1984.

Family history research hooked me in 1984. As a shower gift to my brother's future wife, I decided to fill in a family history book from the local bookstore. I filled in a pedigree chart back to the Revolutionary War ancestor whom my grandmother had used to join the Daughters of the American Revolution.

I wondered what the source was for this soldier's birth date. It wasn't in the vital records for the town listed on the DAR application. A librarian suggested I look for the soldier's Revolutionary War pension application. I found it on microfilm at the Northeast Branch of the U.S. National Archives. I found his affidavit from 1818, and read the words, "I was born in West Haven. My father William Hodge was a poor but industrious mechanic. He was killed by Major Baremore's men at Byram's Bridge and my poor mother got nothing for it from her country." I could hear my ancestor's voice in my ear as I read his words. West Haven, not Milford? A father's name? A father who was killed during the Revolution? So much more to learn!

Finding the truth, as best I could understand it for an historical event, became my quest. I wanted to learn enough to feel that I understood the historical figures, and to fill out that endlessly unrolling pedigree chart. I was hooked on genealogy. I was ready to figure out how to do it as well as I could.

I love to write, teach, and research genealogy. 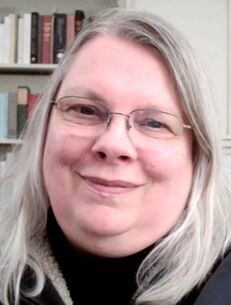 I am a Certified Genealogist® Retired from the Board for Certification of Genealogists®, based in Washington, DC. it was created in 1964 by the American Society of Genealogists' Committee on Standards of the Genealogical Profession. The ﻿BCG home page﻿ contains a definition of genealogy that I love:

Genealogy is the study of families in genetic and historical context. Within that framework, it is the study of the people who compose a family and the relationships among them. At the individual level, it is biography, because we must reconstruct each individual life in order to separate each person’s identity from that of others bearing the same name. Genealogy is the story of who we are and how we came to be as individuals and as societies.

Image of bookcases from Microsoft Office and used with permission.
Image of Barbara by Barbara using Zoom.